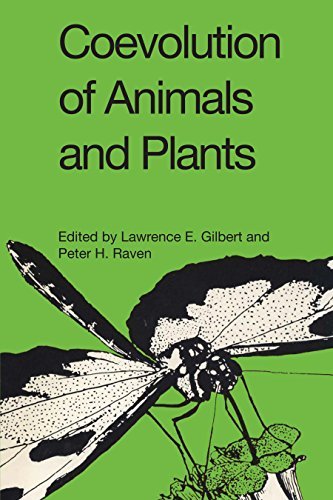 Coevolution represents a point of view about the structure of nature that only began to be fully explored in the late twentieth century. The papers presented here herald its emergence as an important and promising field of biological research.Coevolution of Animals and Plants is the first book to focus on the dynamic aspects of animal-plant coevolution.

It covers, as broadly as possible, all the ways in which plants interact with animals. Thus, it includes discussions of leaf-feeding animals and their impact on plant evolution as well as of predator-prey relationships involving the seeds of angiosperms. Several papers deal with the most familiar aspect of mutualistic plant-animal interactions--pollination relationships. The interactions of orchids and bees, ants and plants, and butterflies and plants are discussed. One article provides a fascinating example of more indirect relationships centered around the role of carotenoids, which are produced by plants but play a fundamental part in the visual systems of both plants and animals.Coevolution of Animals and Plants provides a general conceptual framework for studies on animal-plant interaction.

The papers are written from a theoretical, rather than a speculative, standpoint, stressing patterns that can be applied in a broader sense to relationships within ecosystems.Contributors to the volume include Paul Feeny, Miriam Rothschild, Christopher Smith, Brian Hocking, Lawrence Gilbert, Calaway Dodson, Herbert Baker, Bernd Heinrich, Doyle McKey, and Gordon Frankie.